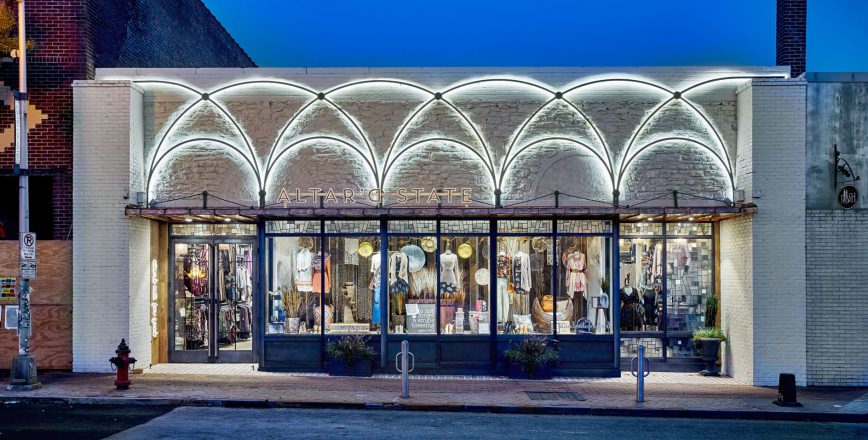 By Nashville Business Journal on April 22, 2017

According to a building permit issued April 20, the fast-growing retailer is headed to 1803 21st Ave. S., the former home of Sam’s Sports Bar and Grill. Elmington Capital Group, the firm that bought the home of Sam’s and its neighbor Boscos in 2015, has dramatic plans for the area, including the addition of offices, retail space and apartments in a new building fronting Belcourt Avenue.

Hillsboro Village, one of Nashville’s most historic and most in-demand neighborhoods, has borne witness to dramatic change in recent years, including the loss of neighborhood mainstays like Sam’s and Boscos, the addition of several new retailers and restaurants and the ongoing construction of the neighborhood’s first hotel, the millennial-focused Moxy.

The addition of Altar’d State brings another trendy, chic women’s boutique to the neighborhood, also slated to receive a jolt of new retail offerings at GBT Realty Corp.’s nearby Village 21 at Regions Park.

Elmington Capital Group declined comment for this story, and representatives of Altar’d State could not be reached for comment. Of note: This isn’t the first development to include both a Hopdoddy and an Altar’d State – the retailer is also joining the burger bar in a Houston project.

Launched “as a modern Christian retail store and coffee shop” in Knoxville in 2009, Altar’d State now operates over 70 boutiques in 22 states, according to its website. The company emphasizes its Christian ties in a variety of ways, including its “Mission Mondays,” through which 10 percent of each Monday’s net proceeds are donated to philanthropic organizations.

In 2015, fashion and style website Racked.com dove in to the company’s quiet but meteoric rise, calling the company “The Massive, Secretive Christian Clothing Chain You’ve Never Heard Of.”